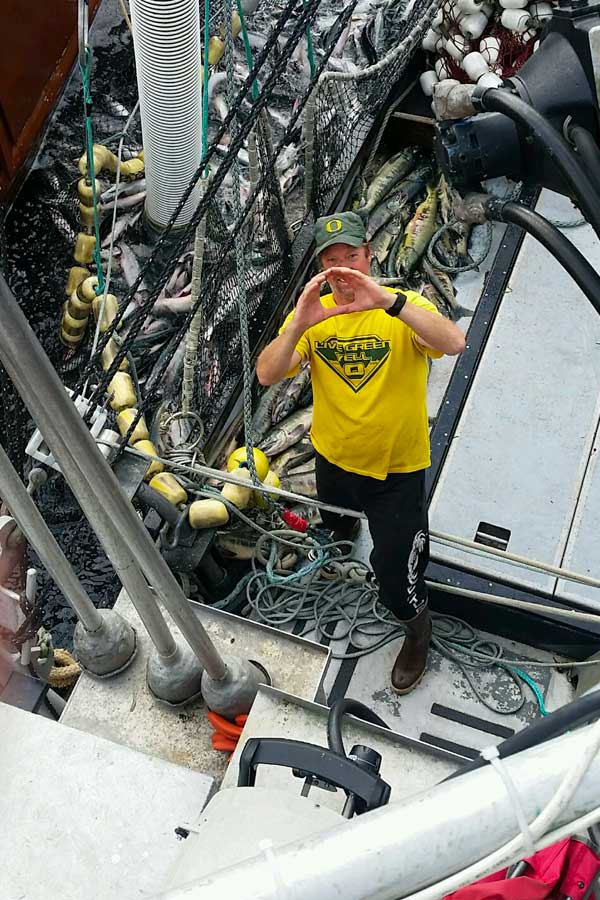 The ocean called to Ryan Rogers when he was a young man.

Ryan chose to follow his older brother to Alaska and there began his journey in the commercial fishing industry. This Eugene native has built his life around adventure and nearly forty years later, Ryan is still fishing on the frigid and sometimes dangerous waters of Alaska.

For years, Ryan fished year-round, navigating massive oil spills and unpredictable ocean storms. “I’ve had some close calls and misadventures,” he says of his time at sea. “It’s just part of the job. Eight winters in the Bering Sea, I cracked bones in my foot and lost a fingertip.” Life as a full-time fisher meant accepting the risks that came with it.

It was also in Alaska that Ryan met his wife, Debbie. She joined him on the boat and they made fishing a family affair, sharing their passion for adventure and the outdoors. “Debbie was a good support through all those tough years when it was really hard to get a crew.”

But when Ryan and Debbie welcomed their first child, their course began to shift. With family as his top priority, Ryan decided to look beyond the physically demanding life that came with winters in Alaska. At the same time, he knew that completely leaving the world of fishing wasn’t an option.

The Adventures of Fisherman’s Market

As Ryan was exploring new career options, one of his friends approached him with the idea of purchasing Fisherman’s Market in Eugene. At the time, the market was exclusively a fresh fish retailer. Ryan and his business partner took a gamble and turned it into a restaurant. “We started selling fish and chips as a way to bring in new people. We hoped the business would start to grow.”

Over time, Fisherman’s Market built up a following of local seafood fans that admired Ryan’s fresh products and unique recipes. The market provided Ryan with an anchor for his family, but still allowed him to set sail in the calmer months. “I was blessed to be able to run the business in my hometown, while still returning to Alaska to fish in the summer.”

Featured On Diners, Drive-Ins and Dives

It was on his boat, nearly twenty years after he purchased the restaurant, that Ryan received a phone call that would change the course of his business. A television producer picked the market to feature on an episode of the hit Food Network show Diners, Drive-Ins and Dives  Once the episode aired, Fisherman’s Market became famous. With a spotlight on the market, Ryan used his newfound national audience to launch his latest business venture, Fisherman’s Kitchen, a boat-to-table meal experience.

Ryan has always sought to take his customers on their own food adventure and Fisherman’s Kitchen is the perfect way for him to do that. Backed by his hardworking family of fishers, Ryan’s team is crafting innovative new recipes to reach more people with premium, wild-caught seafood and ready-to-cook meals.

A moral compass that values teamwork, dedication and creativity guides Fisherman’s Kitchen. Ryan’s passion for creating a quality product ensures his customers a meal that is produced with thought and love.

“In my career I’ve caught over 20 million pounds of salmon, so I’ve fed a lot of people on this planet. I take great pride in that.”

A Dynamic Husband and Wife Team

Mark and Lisa Newell are based out of Newport, OR. They spend most of their time on the Oregon coast but have fished as far south as Morro Bay in San Luis Obispo, CA.

The Newells have been crabbing & fishing for salmon since 1975. They had a 38’ troller named Lorenty which was with them for almost 14 years. In 1988 they bought Oceana, a 42’ vessel that was better suited for crabbing and fished in that boat until 2005. Their current boat, Silver Quest, is a 47’ Sunnyford Fiberglass. It’s set up for crabbing in the winter and spring, adjusts for Halibut and Cod through July, then on to Salmon and Albacore through October.

The Newells business ties with the Fisherman’s Market date back to its early days as a crab shop. Mark and Lisa have always been a steady source of high-quality seafood. These days, the Newells have expanded into the wholesale side of the fishing industry. Asked what his favorite fish to eat is, Mark’s first answer was Halibut. Then he started into how much he likes Scallops, Bluefin, Albacore and Mako Shark…sounds like whatever is closest on the boat!

Seafood meals and products shipped to your door

we’re hooked on giving back to the community